In an ancient cave used by Ancient Egyptians to build their most famous monuments, the Pyramids, we can find a relief attributed to Pharaoh Snefru, who’s believed the founding father of the IV Dynasty, protagonist in about a century of the building of the great renown Giza Plateau, a place in which we can find the most impressive Pyramids ever built by any culture in all history and the biggest and most famous sculpture in the world, the Big Sphinx. One of the current interpretations of this enigmatic iconic-hieroglyphic complex is that it represents the divine king while killing an enemy. It’s useful to observe with great attention this stone work, that will be the subject of this brief inquiry 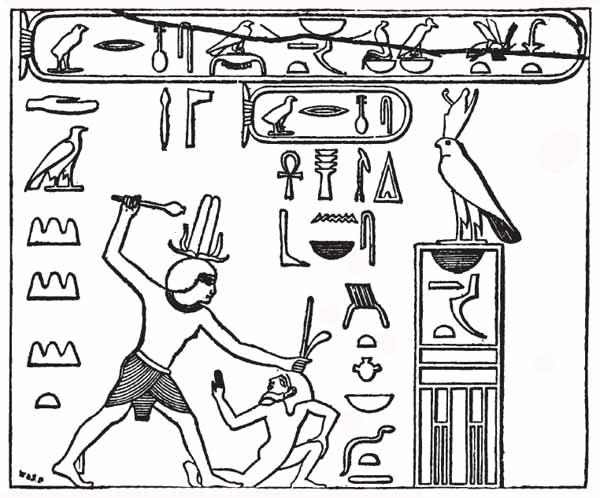 Actually, at first sight, it seems obvious that the scene we are watching at should be that of a killing of an enemy: but it’s not clear who exactly this enemy could be. Following an immediate an realistic kind of interpretation we may think that the Pharaoh is caught in the moment in which he kills an invader coming from North-East, as the relief was sculpted in a cave situated in the Sinai. But who even in a minimal way is expert of the Ancient Egyptian iconographic art knows from the beginning that probably things are not like that. Taking a more famous relief as an example – the iconographic complex representing the as many famous Ramesses victory against the Hittite enemy in Qadesh – we see that this relief tells us of a battle that was won by the Pharaoh war chariot against all the entire enemy army: it is clear that we can’t find just one historian who had considered this kind of story in a serious way. No one in all the modern western world could take into the slightest consideration the hypothesis that the “facts” told by the relief correspond with what we can call the “real events”, or, in other words, with “the truth”. All we know about old and modern tactic, strategy and armaments and all that is reasonable to suppose about the real conditions and real or realistic events of an open field battle forbid us to believe in a serious way – even for a moment – that an entire army, formed by thousands of soldiers, surprised by the enemy in his own encampment, disorderly retreating and got into panic could be saved by the action of a single man, whatever big could be his force, his courage, his ability. The plot of the single hero who in an open field battle knocks down an innumerable mass of enemies is nowadays considered as a fairy tale which just a very little child could believe without being laughed at, or even despised. But, as it doesn’t seem reasonable to suppose that the builders of masterpieces that represent the most high point ever reached by the human architecture during his so long history could be ingenuous children or fools, we have to suppose that the relief of the Qadesh battle must have another kind of not literal meaning: maybe the perspective of the narrators was entirely different from ours, maybe they watched at the same particular facts with a Weltanschauung of other kind, so that a narration that to us results just a fairy tale, built up twisting in a fanciful or even raving way a real historical fact, is in reality a symbolic, religious transfiguration of the events of the battle. So, returning to our enquiry, we could hypothesize that also in the case of the Snefru relief the enemy knocked down he’s not what we could define a real, terrestrial enemy, culturally and geographically well defined. Probably, the divine king is knocking down an enemy that is divine too, a demon, as we could say, a demon that perpetually hangs over Egypt, that perpetually threaten it, and from whom Egyptian people perpetually needs to be protected and saved.

This kind of “archaic” interpretation of the “real” historic facts – which from the modern western point of view results so surprising and incredible that we are inclined to contradict it with sarcasm much before than with reasons – it is confirmed by the fact that in the relief subject-matter of this work the ancient sculptures and drawers seem to have codified with a geometric-mathematic method – that is still unknown but certainly very, very complex – the most famous Pyramids of that period of the Ancient Egyptian history that is usually called “Ancient Kingdom”. Let’s analyze the images: 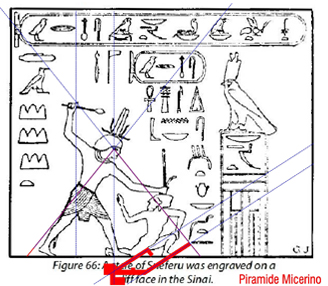 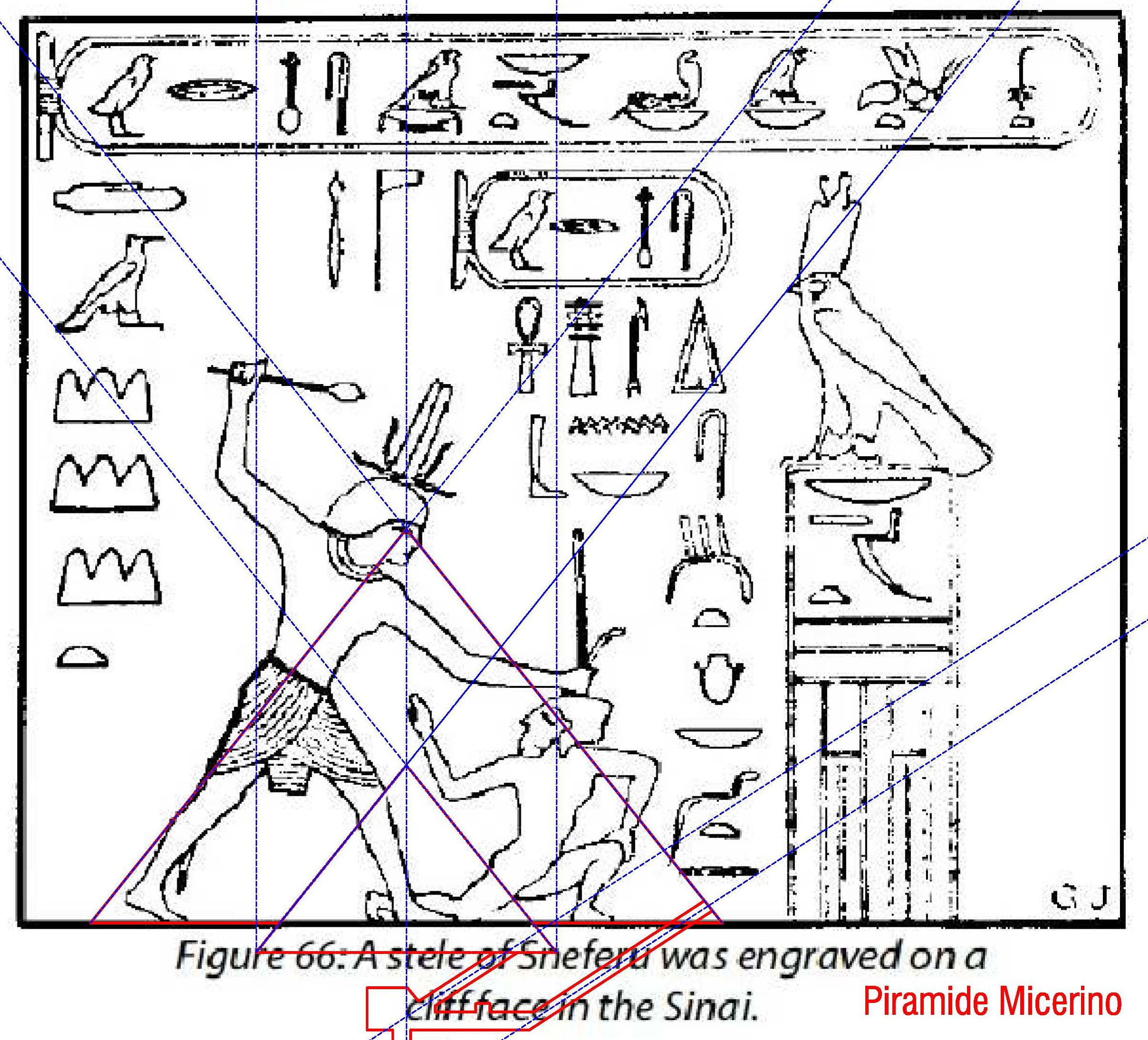 These images seem to show us as an obvious and apparently incontestable truth what is in fact an historic hypothesis which in contrary – given our current ideas about the Neolithic and the Eve of Historic Times – results overwhelming, incredible or almost absurd: in the Snefru relief we can see enclosed, following the rules of a mathematical-geometrical code that already at first sight appear very refined – not only his most famous Pyramids – the Red and the Bent Pyramids – but also the Pyramids of his still to born descent, that’s to say his son Cheops, his grandchild Khefren, and the Khefren grandchild Menkaure. Actually, it seems that both the iconographic part of the imagine and the hieroglyphics were been formally studied and mathematically dimensioned in a masterly way to get in touch – always in a very meaningful way – with at least five Pyramids, which have very different internal structures and different typical inclinations. And the same geometrical phenomenon goes on if you change the position and the dimensions of the Pyramids. Pointing with the top in other places than the Snefru eye you can see things that result even more overwhelming

THE COMPUTER ENQUIRY OF THE RELIEF

At this point is unavoidable to inform the reader that the computerized inquiry of the Snefru relief is just at its beginning, ant that an expert is accurately controlling if it could contain the constructive codes of others Old Kingdom Pyramids and – above all – if it does conceal what we can call a second level code – this time of an astronomical kind. That would make of this work and presumably of all the iconic Ancient Egyptian production a true geometrical and mathematical masterpiece. If the clues that already we seem capable to guess would become assured proofs, it would be very, very hard to attribute this kind of knowledge to a kind of craftsmen that we consider sort of “primitives” – even if we are generous enough to award them of an as deep as enigmatic “aesthetical sense” – as we usually think that they were devoid of instruments that to us result banal and obvious as the wheel and the pulley. Anyway, it’s clear that before to arrive to any kind of conclusion this issue will request a very long period of study, that could be able to prove or to disprove those which at the moment we can consider just starting points, or first impressions. But if at the end the existence of this codes would be mathematically demonstrated – because a mathematical and geometrical code could be proved only by its mathematical and geometrical reconstruction – and then confirmed both by the computerized analysis and by an however complex and difficult long period agreement between specialists – this discovery would pose inevitable questions about history and prehistory that obviously can’t be solved in the short space of an article and by the frail mind of a single human being. The facts that seem to come up would request the work and the collaboration of many experts of architecture, astronomy, mathematics, hieroglyphic inscriptions and iconography, because the consequences of the existence of a so complex and so ancient code would be really overwhelming and would have incalculable consequences in our vision of the world. Because, if it is clear that this relief is certainly an art work too, it seems to have also an hidden and enigmatic meaning, that in this moment we are not able to guess or even to conjecture: we can only say that – as the Big Pyramid shafts are oriented to stars – the relief too must have someway a some kind of astronomic meaning too, as the Big Pyramid has. But, aside this, it’s not sure even if future researches will arrive beyond what appear an incredibly and almost magically intricate surface, as the Ancient Egyptian architects could have worked with Pyramids as they did with the Snefru relief of Sinai, that’s to say hiding in there a meaning that was comprehensible only to initiates. It could be as if Bach, in some of his fundamental works, would have incorporated the whole of his works, following an hidden and secret system, so that intersecting the scores we could obtain a kind of experiences and knowledge completely different from which of a simple aesthetical pleasure. In conclusion, we have to emphasize the fact that this discovery doesn’t fit with the emphatic titles of the so called “popular press”, a bombasting useful only to catch the small time attention of a naïve public, the illusory screaming and rumors in which unrealistic gnoseological epiphanies are systematically promised and never kept: “Discovered the Ancient Egyptians secret!”, “Revealed the mystery of the Big Pyramid” and things like these. In contrary, the discovery of what – having not any better name – we called “the Snefru code” is the revelation of a Socratic knowledge of our ignorance, the vanishing of an appearance considered for decades a solid fact. The only thing that this for the moment enigmatic and silent language reveal us is that what we believed to know about the Ancient Kingdom and the Prepharaonic Period – and maybe about the entire Prehistory – do not correspond to the truth, and if to the truth we want to come to, we have to resign to begin our researches all over again.